ANOTHER STROLL IN THE HINDU KUSH

This was originally published on Bootsnall

I flew into Lahore from Bangkok late on the night of the 5th, it was raining – hot muggy rain. I stayed at the notorious Regal Internet Hotel. It reminded me of the Paragon Hotel in Calcutta; freaks on the roof – Japanese, Scotch, German, – and dorm-style accommodations. I slept on a mattress on the floor in a room with three others for 150 rupees/night. We stayed up till 3:00am; smoking and talking…most of the others were headed for Northern Pakistan and China, a couple on the way to India. Even though these were the cutting edge of young backpackers, light-years beyond the punks who swagger around Bangkok’s Kao San Road, I was the only one crazy enough to be headed into Afghanistan. Early on the 6th I walked over to the bank and took 40,000 rupees out of the ATM. On the way I met a guy from New Zealand who was also staying at the Regal Internet. We shared breakfast – channa dal and paratha – and talked; he was traveling to Europe and I was headed for Afghanistan. Then I caught an air-conditioned bus to Peshawar. I left Lahore at 11:00am and arrived in Peshawar at 6:00pm. The Grand Trunk Road  – better and faster – was much improved compared to three years ago.

I checked into the Rose Hotel, in the Khyber Bazaar, and they gave me the same room as before, even the door still stuck – room 402 / 450 rupees per night. It was 100 rupees more than the last time because a tiny TV had been added to the room.

The 7th was Sunday, which is the legal holiday in ‘secular’ Pakistan, rather than the Islamic Friday, so the Afghan Consulate was closed. I walked from Saddar to the Peshawar museum…a very hot [over 40℃] walk. The Raj-era museum houses an excellent collection of Gandharan art, though still hot and sweaty despite the thick wall and high ceilings. The fee was 100 rupees for a foreigner, only 10 for a local. They have an excellent collection of old seals and coins and several rooms devoted to ethnic crafts. Before looking at the ‘new antiques’ in the bazaars it’s always a good idea to see what the authentic pieces look like for comparison. The Lahore Museum is even better, but I wasn’t there long enough this trip.

I then walked to the Spogmay Hotel in Namak Mandi – the Salt Bazaar – and trudged up the six floors of winding marble stairs, but the metal gate to the top floors were locked. They informed me at the reception desk that my friend Attaullah was in Afghanistan. Then I strolled the backstreet bazaars and saw some nice, but very expensive, old beads. I drank a mango shake and returned to my hotel by 12:30. There I relaxed, showered and washed my clothes

I went out again at 5:30 to buy naan and pakoras from a street stall for dinner. As I was walking I noticed a familiar side street. I took it and discovered the Namak Mandi gem-cutting bazaar, one of several places that I had been looking for in the morning. It was half closed because of Sunday, but I still saw some nice specimens. Vowing to return when more shops were open, I strolled back to my hotel in a very good mood. I had another mango milk shake, bought my dinner, then returned to my room. I ate and relaxed, then there came a surprise visitor. It was Ruhaullah, Attaullah’s son. He told me that he still had the killims and sozeny I had left with them to be repaired 3 years before. We made arrangements to meet for dinner at the Spogmay the next day. 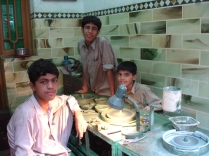 One Comment on “ANOTHER STROLL IN THE HINDU KUSH”