Bangkok is an excellent place to buy gems and jewelry tools and a trip to Silom road is a great excuse to stop by the Afghan and Pakistani antique shops near the river. In addition my son had just finished the Diamond Appraising section of the GIA Graduate Gemologist course and he asked me to pick up some diamond tweezers if I could.

I took the Skytrain to Saphan Taksin station, right on the river, and from there it was but a short walk to Silom Road and the shops I was looking for. Winter in BKK is one of the most pleasant seasons, sunny, but low humidity. Among the ‘wholesale’ gem and jewelry stores there were several Afghan and Pakistani shops that I regularly like to peruse. Those, plus the shops in Pratunam Market and in the Chatuchak Weekend Market, provide a selection of old and new antiques, ancient beads, bronze knickknacks, and other odds and sods unseen outside of Chowk Yadgar in Peshawar and Chicken Street in Kabul, often at even cheaper prices.

But first the gems and tools. I continued up Silom Road to the Jewelry Trade Center. This is home to AIGS – the Asian Institute of Gemological Science, probably the best gem school in Asia. Several of my friends have graduated from there and I have taken their corundum seminars in the past. As I walked in I saw a shop on my right that had some very nice ruby specimens on display. One large specimen from Vietnam caught my eye and I had to take a picture. Still on my list of ‘things to do’ is to take a dirt bike ride around Northern Vietnam and visit the gem mines and markets near the Laotian border. 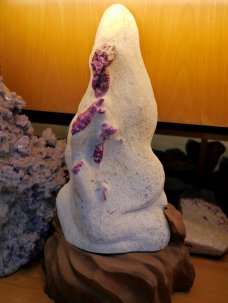 If you ever need to have a gem stone authenticated AIGS has a lab on the basement floor where you can get a certificate. Also, there is an extensive array of small shops, mostly run by Indians from Jaipur, who sell both cut stones and rough at some of the best prices in Bangkok. Of course, the real wholesale action is conducted from anonymous offices on the upper floors of unmarked buildings in the area. But this is not for the dilettante. The Americans involved are ex-CIA and the Chinese have links to the Triads. The business on that level is as shady and dangerous as smuggling heroin, and just as likely to cause you to end up with fish nibbling your toes at the bottom of the Chao Phraya River.

I had a quick look around, talked with a few dealers, then headed out and crossed the street. I walked down a side street a short way until I came to the World Jewelry Tool Co., Ltd. This is where AIGS sends their students to purchase gem identification tools and other supplies. I had a card from AIGS, so I can get the 10% discount. I get the same feeling of joy when I walked in there that I get in a hardware store or a computer store, a feeling of home and belonging; a feeling only a craftsman can understand.

Naturally I walked out with more than I had planned on. Besides the titanium tweezers for my son, I bought some Ziploc bags for future gem and bead acquisitions, a new portable scale, as my old one was getting worn and a bit battered, and a leather case for my BelOMO triplet jeweler’s loupe, made in Belarus by a company famous for making Soviet Military sniper scopes. 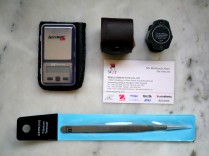 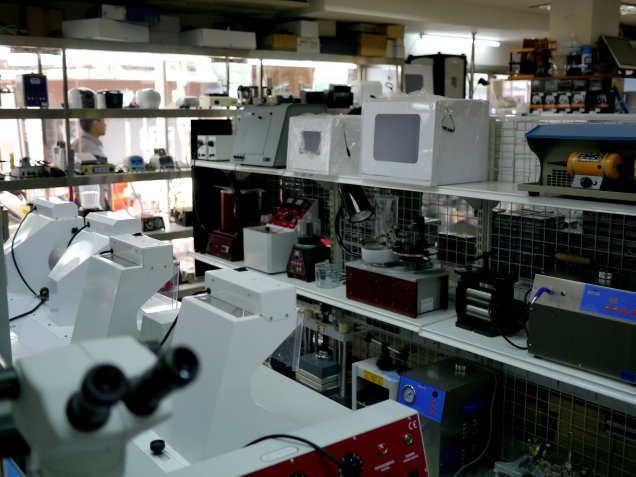 Now I was ready to hit the antique shops. As before, I’m not going to mention the exact shops I went to or exactly where they are or what prices I pay. What’s the fun of that? If you are serious about hunting for antique beads and bronze pieces, then you will be able to locate them. I looked at the window displays as I walked and, when I saw one with an intriguing selection, I went in and started talking to the owner. I had taken my necklace out, just to prove I knew what I was doing and to save time, then started going through the jumbled baskets and shelves in the corner, as well as looking over the pieces in the window. I selected several that caught my eye, a worn bronze nine-pointed flower, a gilded earing and, the most interesting piece, a bronze tiger plaque that I spent quite a long time examining with my loupe to make sure it wasn’t a new casting of an old piece. The owner knew the provenance of the smaller pieces, Kushan sites near Swat, Pakistan. But they had no idea about the tiger. Inwardly I grinned at this. They claimed to have bought it from an Iranian man  and thought it was perhaps from Luristan. I wasn’t so sure, as I remembered similar pieces from Mongolia and Xinjiang. I had bought a small bronze in the Naran Tul [Black market Bazaar] in Ulaan Batur that had a similar patina on it.

Next, of course we drank green tea and talked of Pakistan and Afghanistan, the people we knew, the places we’d been, the sorry state of politics, and gradually got around to bargaining for the pieces. The first price wasn’t exorbitant, so I knew I was on to something. My first price wasn’t insultingly low, either. More talk and green tea and more examination of the pieces, the usual bargaining dance … I’d been doing this for over 40 years and we both knew the steps. No hurry – no rush and finally a price was reached that we both felt happy with. Antiques, like gems, have no ‘Price’, per se, just what the buyer and seller agree upon. 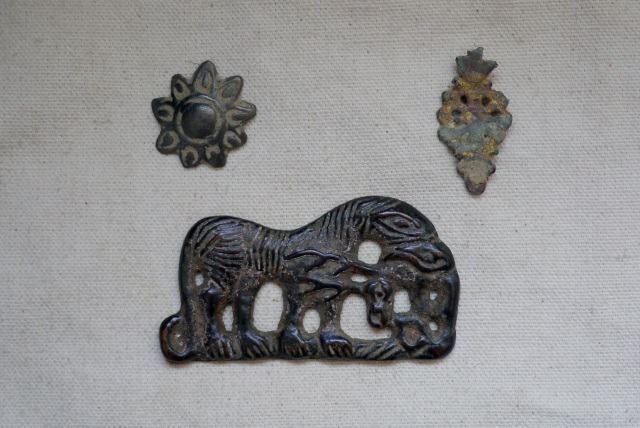 I stopped in several other shops on my way to the Sky Train station, saw rough lapis, some more old Pakistani bronze pieces and pottery and statues, saw old beads and jade, though most of those were over-priced. But I was happy with my purchases. Perhaps I’d stop back in the area again after I returned from Koh Tao and a relaxing time on the beach.

When I got back to my hotel room and turned on my MacBook Air I searched for a similar piece to the tiger plaque and found one almost exactly the same on the website of the Metropolitan Museum of Art. It was identified as a 2nd Century BC. NW China, Nomadic belt plaque. Ordos.

I smiled at that, and felt satisfied. Even though I planned to keep it for my collection, it was still probably worth twenty times what I paid for it. Inshallah!